2016: a record year with 1.35 billion dollars in foreign direct investment

With Europe and the United States shifting toward protectionism, the global political and economic landscape holds many challenges for Greater Montréal, but there are also opportunities to be seized in terms of attracting foreign investment, international organizations and skilled foreign workers.

In 2016, Montréal International helped 39 foreign companies locate or expand in the region, facilitating a record 1.35 billion in foreign direct investment, up 35% from the previous year. The investments accounted for 15% of GDP growth in Québec and generated $115 million in tax revenue for the province, in addition to helping create or maintain 3,240 direct jobs in Greater Montréal.

Foreign direct investment dollars flowed mainly into the following sectors: information and communication technology (52%), including big data, artificial intelligence, visual effects and animation; aerospace (15.1%), agrifood (10.7%), and life sciences and health technologies (6.8%). Investment by U.S. firms accounted for close to half of all investments, more than double compared to 2015, as a result of increased lead generation efforts in that market.

Greater Montréal has recently been named one of America’s top 5 destinations for foreign direct investment and placed among the top 3 for FDI strategy in fDi Magazine’s American Cities of the Future 2017-2018 rankings.

In 2016, we stepped up our efforts to bring more skilled workers and international students to Greater Montréal and foster growth in the region’s high-tech sectors.

In 2016, we brought the Centre for Innovation and Knowledge Transfer on the Social and Solidarity Economy (C.I.T.I.E.S.) to Montréal, consolidating the city’s position as a pioneer of the social economy. We also facilitated the expansion of the Finance Alliance for Sustainable Trade (FAST), a leader in farm and forestry financing for developing countries. What’s more, we supported 40 Montréal-based international organizations in their development efforts. The year was also a particularly successful one in terms of the number of international organization projects submitted to financial partners.

In November 2016, Montréal International organized the first Greater Montréal Attractiveness Forum, a major event where over 500 business community representatives worked together to find ways to make the region more competitive and more attractive to businesses. Forum participants made 25 recommendations on a number of issues, including attracting and retaining temporary skilled workers, promoting university education and leveraging new technologies.

To learn more about our 2016 achievements, please read our Activity Report: https://www.montrealinternational.com/bilan2016/index-en.html 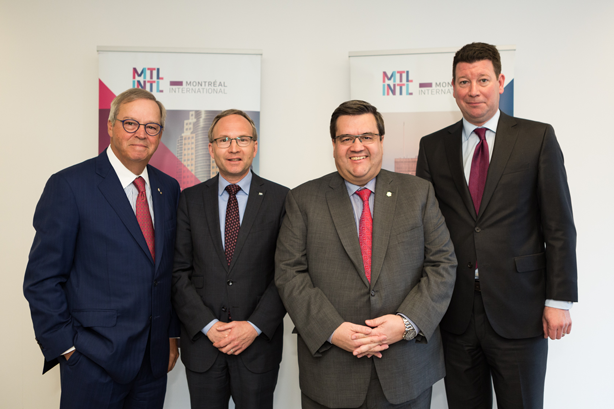 “At a time when Western nations are having doubts about keeping their economies open, Canada and Québec are looking outward and positioning themselves to attract the most innovative businesses, the most influential international organizations and the most creative and skilled international workers. We must continue that trend, as open economies like Greater Montréal need to look past their borders to achieve growth.”

“Montréal International’s 2016 results demonstrate our leadership and strategic vision for economic development. We are extremely grateful to our public and private partners for their ongoing commitment and financial support. In 2016, we had the privilege to work with 125 private businesses dedicated to supporting economic growth in the region and creating wealth for all.”

—L. Jacques Ménard, President of the Board of Directors, Montréal International

“Congratulations to Montréal International on its achievements! The agency’s efforts helped raise Greater Montréal’s international profile and generated significant economic spin-offs for the entire region. Every success is a reminder that we need to join forces if we want to compete with other major cities around the world. And every success teaches us how important it is to make Greater Montréal more competitive and more attractive to talent and businesses.”

—Denis Coderre, Mayor of Montréal and President of the Communauté métropolitaine de Montréal

“Record investments helped create and maintain 3,240 jobs in Montréal. As long as Greater Montréal’s economy is booming and attracting substantial foreign investment, the entire province stands to benefit. That is why I am proud that the Government of Québec supports Montréal International, an organization that has played a key role in making that happen.”

—Martin Coiteux, Minister of Municipal Affairs and Land Occupancy, Minister of Public Security and Minister responsible for the Montréal region

“For over 20 years, Montréal International has been helping to attract foreign investment and promote Montréal as a world-class city. The initiatives carried out in recent years have contributed to the economic development of Greater Montréal and have helped shape the economy of tomorrow: an increasingly diversified economy that is open to the world and where cities like Montréal are hubs for innovation and the sharing of ideas. Encouraging foreign investment and attracting international organizations help create good jobs right here at home—results that directly support the priorities of the Government of Canada.”

Established in 1996, Montréal International is a non-profit organization funded by the private sector, the governments of Canada and Québec, the Communauté métropolitaine de Montréal and the City of Montréal. Its mission is to attract foreign investment, international organizations and skilled talent to Greater Montréal.