The numbers don’t lie: 2017 was a banner year for Greater Montréal.

Real GDP rose 3.5%, posting the strongest increase since the turn of the century, while employment grew by 3.6%, the highest rate since 1998. The city’s economy is on fire. And the cranes dominating the skyline are proof that major public and private investment projects are under way. Greater Montréal’s job market was particularly hot in 2017, as the participation rate hit a record high (67.0%) and the unemployment rate fell to a record low (6.6%). 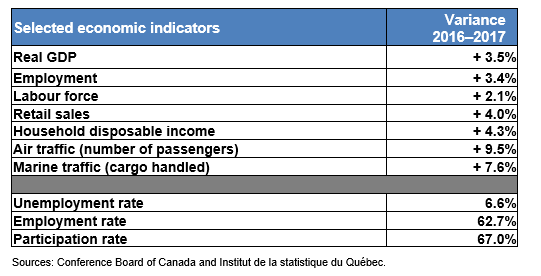 Opening the door to foreign talent and investment

One reason the economy is doing so well is that foreign investment and talent have been pouring in from abroad like never before.

International immigration peaked at over 53,000 and the number of international students attending Greater Montréal universities jumped by over 10% in 2017. Air and marine traffic also reached unprecedented levels, with over 18 million passengers (a 9.5% increase) and over 38 million tonnes of cargo handled (a 7.6% increase).

What’s more, in 2017, Montréal International helped a record number of businesses and workers settle and succeed in Montréal. Most of them chose to invest or work in the city’s high-tech sectors, such as AI, video games, visual effects, aerospace, fintech and life sciences and health technologies.

To sum up, seeing how foreign talent and investment drove Greater Montréal’s economy in 2017, we cannot but agree that keeping our economy open is the best thing we can do respond to the current wave of protectionism sweeping the globe.