Today marks the launch of Air Canada’s daily year-round flights from Montreal to Shanghai, China, the airline’s first direct service to Asia from Montreal, offering convenient one-stop access to points throughout Quebec, Atlantic Canada and the United States.  It also marks the airline’s first route from Montreal to be operated with its state-of-the-art Boeing 787-8 Dreamliner aircraft and cabin features.  All Air Canada flights provide for Aeroplan accumulation and redemption and, for eligible customers, priority check-in, Maple Leaf Lounge access and priority boarding benefits.

“With the launch of Montreal-Shanghai non-stop service today, we are delighted to inaugurate Air Canada’s first direct flights between Montreal and Asia, building on Air Canada’s success in the rapidly growing Chinese market,” said Benjamin Smith, President, Passenger Airlines at Air Canada. “This also marks the introduction of Air Canada’s first 787 Dreamliner service from Montreal featuring our industry-leading international product, and further underlines our commitment to expand our global reach from Montreal-Trudeau reinforcing it as a strategic hub that offers easy and convenient connections from points throughout Quebec, Atlantic Canada and the United States. With an average elapsed time of over 13.5 hours, it is the longest flight ever operated by any carrier from Montréal-Trudeau airport.

“China is Canada’s second largest trading partner and Air Canada is the first and only Canadian carrier to operate daily non-stop transpacific service between Montreal and the Asia. Together with our Star Alliance partners, Air China and Shenzhen Airlines, and partner Juneyao Airlines, that serves more than 30 destinations in China, we are now offering the growing number of travellers between Montreal and China even more convenient travel options, With our recently announced Montreal-Tel Aviv, Montreal-Algiers and Montreal-Marseille flights, Air Canada has now increased its international capacity from Montreal by 168 per cent since 2009, with direct service to 13 cities in Europe, two in North Africa, one in the Middle-East and starting today, China,” concluded Mr. Smith.

“There is no doubt that this new daily route between Shanghai and Montreal will increase the number of Chinese tourists in Quebec, which has already almost tripled from 2010 to 2015. This bridge between the two continents will stimulate the growth of our commercial and tourist exchanges with China, which will, in turn, promote Quebec’s economic expansion,” said the Québec Minister of Tourism, Ms. Julie Boulet, who was on the inaugural flight as part of an economic mission to China.

“This inaugural flight represents a very significant investment by Air Canada and our partners, as well as an exceptional opportunity to strengthen the special relationship between the two metropolitan areas and our two countries. The tourist and economic benefits of these direct flight routes are concrete and show that Montreal is once again a hub of Canadian and North American aviation. I’m motivated to continue working with Air Canada and our partners to further develop the opportunities for new flight routes to Montreal,” stated Denis Coderre, Mayor of Montreal before boarding the flight.

“We are very happy to see Air Canada add its first link to Asia from Montréal-Trudeau. This is a great news for our passengers and the Montreal business community,” said Philippe Rainville, President and Chief Executive Office of Aéroports de Montréal. “Thanks to our airport’s efficiency as a hub, this new flight will also provide travellers from Shanghai quick connections to the U.S. and other Canadian cities.”

“Tourisme Montréal would like to congratulate Air Canada on this new air link, which is highly strategic for the development of Montréal’s economy and tourism industry. This is one of the most promising announcements in the past 10 years. We will be working closely with our partners to ensure this new initiative is a major success for local tourism,” said Yves Lalumière, President and CEO of Tourisme Montréal.

“The Tourism Alliance and its partners are actively working to promote our province as a world-class destination, showcasing its grandeur and richness of experiences in key markets such as China,” said Martin Soucy, President and CEO of the Quebec Tourism Industry Alliance. “As a partner in success for Québec’s economic expansion, the Alliance welcomes this new flight, a decisive element to improve access to the Quebec province. An increase in traveller arrivals from China serves as a powerful stimulus to our industry’s development.”

In Montreal, flights are timed to optimize connections to and from the carrier’s extensive Eastern Canada and U.S. networks including Ottawa, Quebec City, Halifax, New York and Boston.

In Shanghai, Star Alliance partners Air China and Shenzhen Airlines, along with our partner Juneyao Airlines, offer excellent connectivity to domestic China destinations such as Chengdu, Chongqing and Shenzhen. 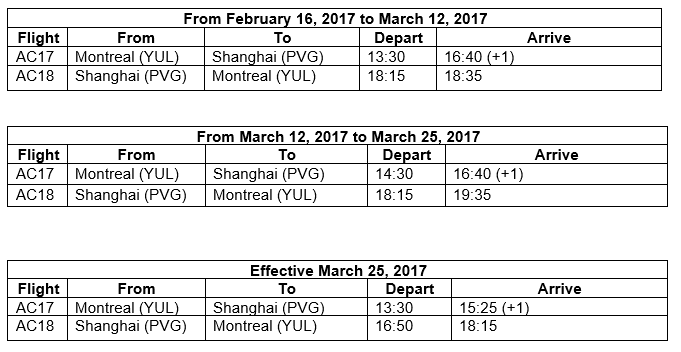