Air Canada inaugurated the only non-stop service between Montréal and São Paulo, Brazil. Last night’s departure of AC96 which arrived in São Paulo this morning marks the beginning of three weekly flights from Montréal until March 27, 2020.

“We are very pleased to celebrate the historic start of non-stop service between Montréal and Brazil, marked by the launch of our newest international flight to São Paulo. Complementing our Toronto services, our new flights from Montréal provide another convenient link to Brazil’s largest city and financial centre while offering a great opportunity for Brazilians to enjoy an exceptional Québec winter vacation. São Paulo is one of 13 new international destinations added by Air Canada from Montréal-Trudeau Airport since 2017, further reinforcing our ongoing transformation of Montréal into a competitive, international hub. The Montréal–Brazil route also underscores Air Canada’s strategic expansion to South America, with new flights that launched from Toronto to Quito on December 8, and starting next summer, from Montréal to Bogota,” said Mark Galardo, Vice President, Network Planning at Air Canada.

Additionally, award-winning Montréal Chef Antonio Park’s menu creations with a South American inspiration are presented as a dining choice in Signature Class. His menu options will also be available at the Montréal International Maple Leaf Lounge as well as in the Toronto-São Paulo Signature Class flights. 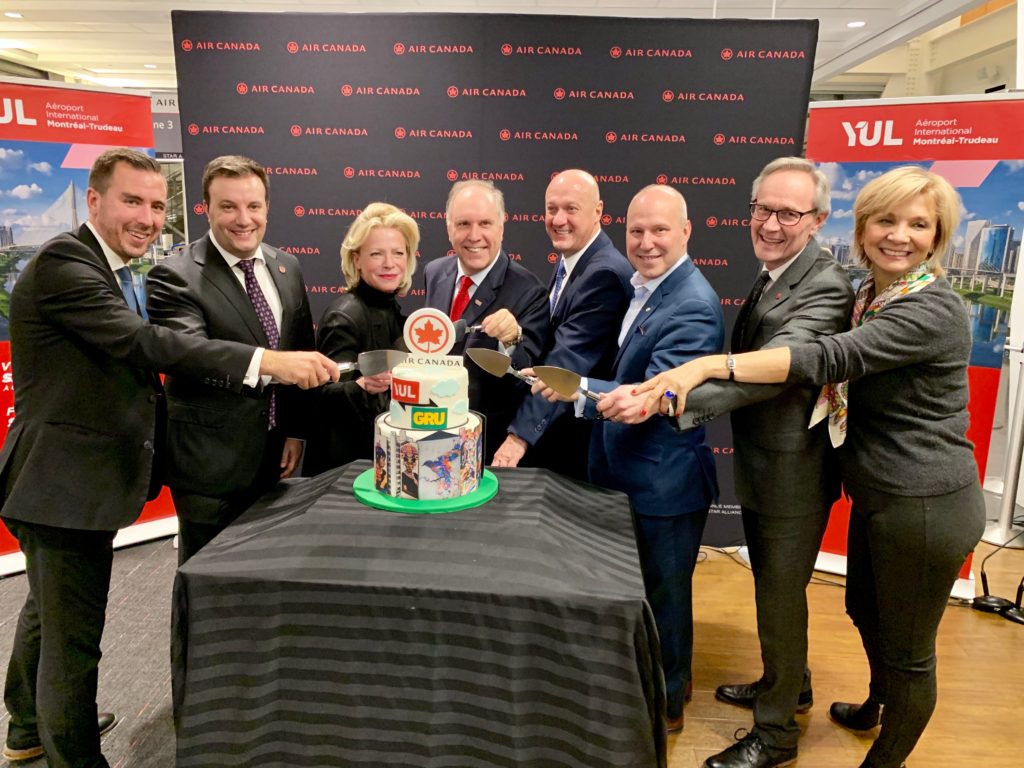 “We are very pleased to welcome the new route to Sao Paulo, a major economic and industrial hub for business travellers. We have been waiting a long time to be able to offer this destination to our passengers,” said Philippe Rainville, President and CEO of Aéroports de Montréal. “Thanks to our major partner, Air Canada, YUL Montréal-Trudeau International Airport is continuing to strengthen its role as an international air traffic hub and enhance its air service to South America.”

“The Government of Québec congratulates Air Canada and Aéroports de Montréal, as well as the public and private partners concerned, on the establishment of this new direct air link between Montréal and São Paulo. I am convinced that it will help strengthen relations between Québec and Brazil, Québec’s largest trading partner and largest customer in South America, as well as with the State of São Paulo, where Québec has had a representative office for more than 10 years,” said Nadine Girault, Minister of International Relations and Francophonie.

“The Government of Québec salutes this new direct link between Québec and Brazil, which will undoubtedly attract growing numbers of Brazilians to Québec. Brazil has the world’s 10th largest pool of tourists and Québec stands out more than ever as a world-class destination with its unique tourism offerings, authentic experiences and four distinct seasons. The link is thus a promising one, an additional bridge between our two nations that opens a new chapter for our tourism industry and our economy. With the new Explore Québec program promoting accessibility throughout our vast territory, all of Québec’s regions will benefit from this new link,” said Caroline Proulx, Québec’s Minister of Tourism. 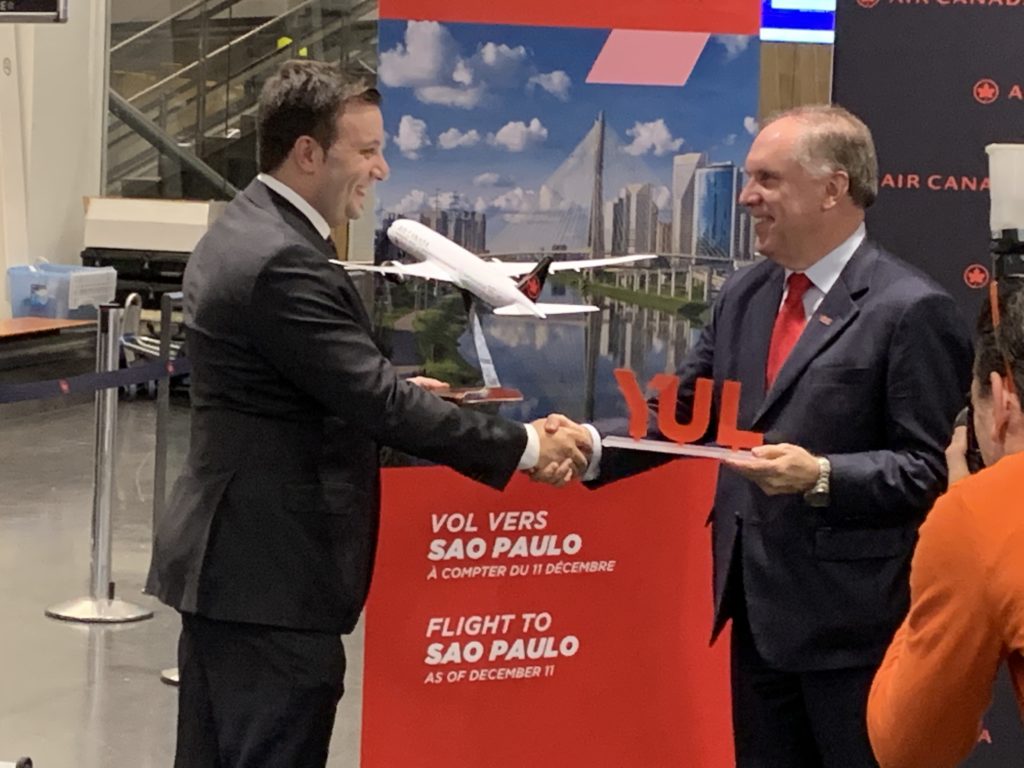 “Brazil is Québec’s largest trading partner in Latin America. This new direct flight to Sao Paulo, a major economic and industrial hub, will facilitate growth of Montréal’s businesses in this market, which offers significant commercial opportunities in key industry sectors such as advanced manufacturing, artificial intelligence and aerospace. The Chamber of Commerce of Metropolitan Montréal congratulates Air Canada for its leadership to enhance Montréal’s status as a global hub for air travel, and its commitment in the city’s international expansion,” said Michel Leblanc, President and CEO of the Chamber of Commerce of Metropolitan Montréal.

“As Brazil recorded a 38 per cent increase in arrivals to Québec in 2017, the Alliance welcomes the launch of a new Montréal‒São-Paulo nonstop direct flight. This initiative supports the current efforts to position Québec as a travel destination to markets in South America, while reflecting positively on our industry’s seasonality. The Brazilian visitor is particularly fond of our winters, our wide-open spaces and our local flavours. The Alliance acknowledges Air Canada’s commitment in launching this direct international nonstop flight to Québec. Accessibility is a determining factor when pursuing vigorous growth on the international visitor market ‒ in turn, it generates major economic spin-offs for the entire destination,” said Martin Soucy, Chief Executive Officer at the l’Alliance de l’industrie touristique du Québec.

“This new flight to Sao Paolo is excellent news for Montréal, which reaffirms its position as a major hub for international destinations. The entire ecosystem under Tourisme Montréal’s mandate salutes the efforts made by Air Canada to improve the accessibility of our destination. We intend to work closely with our partners to ensure the success of this new route,” said Yves Lalumière, President and CEO of Tourisme Montréal.

The schedule is timed for convenient connections across Air Canada’s network in North America, including to and from Vancouver, Calgary and Québec City, New York and Boston, as well as to and from several Brazilian cities beyond São Paulo.

Air Canada, Air Canada Rouge and its regional airline partners flying under the Air Canada Express banner operate an average of approximately 2,300 return flights per week from Québec airports to 102 destinations worldwide: 28 in Canada, including 9 in Québec, 24 in the United States, 24 in the Caribbean, Central America and Mexico, 18 in Europe, two in Asia, two in North Africa, one in the Middle East and three in South America.

Air Canada is Canada’s flag carrier and is among the 20 largest airlines in the world, serving nearly 220 airports on six continents. Air Canada’s global head office is in Montréal, and the airline employs 36,000 people worldwide and has been recognized multiple times as being a leading global carrier as well as one of Montréal’s top employers.