The International Centre for Innovation and Knowledge Transfer on the Social and Solidarity Economy (C.I.T.I.E.S.) opened its new headquarters at the Maison de l’économie sociale in Montréal’s Centre-Sud district.

With more than one hundred guests in attendance—including local and foreign government representatives, Gerardo Pisarello, deputy mayor of Barcelona, and Alvaro Porro, Barcelona’s political commissioner responsible for the social economy—C.I.T.I.E.S. presented the vision and policies that will position it as a tool for international collaboration serving innovative cities that are committed to the social economy, also marking the official launch of the organization’s activities in Montréal. 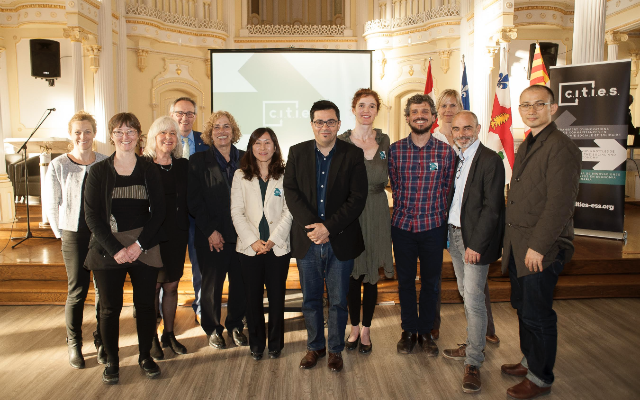 C.I.T.I.E.S. supports territorial development and promotes the social economy through cooperation, sharing of knowledge and adoption of good practices at an international level. The centre fosters the emergence of common and multi-territorial projects through exchange, transfer, training and consultation on public policy and mechanisms for collaboration between local governments and civil society.

The organization is comprised of government, academic and practitioner members from Seoul (South Korea), Barcelona (Spain), Bilbao (Spain) and Montréal.

These territories are internationally recognized for their social and solidarity economy practices. C.I.T.I.E.S. also works with stakeholders in other territories that are seeking to improve their practices.

Implemented to capitalize on the mobilization that resulted from GSEF2016—the third Global Social Economy Forum co-organized by the City of Montréal and the Chantier de l’économie sociale[1]—the decision to set up the organization’s headquarters in Montréal was a logical move for the founding partners.

“Not only will the city benefit from recognized social economy expertise and leadership, its cultural diversity, its status as a world-class university hub and its tradition of cooperation between governments and civil society were also considered when selecting a location for the C.I.T.I.E.S. headquarters. The financial support of the governments of Canada and Québec and the City of Montréal also played a key role in launching the organization ,” said Martin Van Den Borre, Executive Director of C.I.T.I.E.S.

C.I.T.I.E.S. mobilizes the expertise of partners in different territories to develop and adapt validated practices conducive to social economic development, including the production and adaptation of public policies. In addition to transfer and support activities, it is also a useful tool for international solidarity, fostering inclusive and sustainable development for communities. “Our transfer activities with Seoul and Barcelona are already underway, and thus far have focused on solidarity lending, housing and youth entrepreneurship. Our team is also in discussions with other cities in Asia, the Americas and Europe that are looking to become an active part of our network,” explained Béatrice Alain, President of C.I.T.I.E.S.

“Montréal is already home to 65 international organizations—the largest such community in Canada and North America, after Washington, D.C., and New York City. The arrival of a leading organization such as C.I.T.I.E.S. helps strengthen and promote this unique ecosystem, and boosts Montréal’s profile in international discussions on the social and solidarity economy ,” said Hubert Bolduc, President and CEO of Montréal International. “We understand just how strategic international organizations are to Montréal, and we are determined to help them expand in our region.”

“The global economy is changing and the Government of Canada is working hard to foster inclusive and supportive economic development. Constructive dialogue among peoples helps ensure inclusive growth. That is why I welcome the arrival of C.I.T.I.E.S. in Montreal. This international organization will ensure an even greater focus on global trade and the development of business partnerships, while helping to showcase the expertise of Montreal and Canada on the international scene.”
− The Honourable Navdeep Bains, Minister of Innovation, Science and Economic Development and Minister responsible for Canada Economic Develop for Québec Regions (CED)

“Through its commitment to the international stage, the Government of Québec ensures the continued development of its recognized social economic expertise. The decision by C.I.T.I.E.S. to set up its new headquarters in our city is another example of Québec’s focus on the sharing of expertise in the international arena. Our 29 Québec representation offices around the world and C.I.T.I.E.S. will be able to support each other in pursuit of their mission, thus benefitting Québec and promoting the experience!”
− Christine St-Pierre, Minister of International Relations and La Francophonie

“Recognized around the world as a social economy leader, the City of Montréal is proud to welcome C.I.T.I.E.S.’s headquarters. As a city of knowledge and social solidarity, Montréal is the ideal host location for C.I.T.I.E.S., which will enjoy access to a dynamic and innovative ecosystem. Montréal will have the opportunity to strengthen its social economy positioning—which is a key sector of its economic development strategy.”
− Valérie Plante, Mayor of Montréal and Chair of the Communauté métropolitaine de Montréal

“The municipal government of Barcelona considers the social economy as one of the most important keys to the future of our city. It is for this reason that the municipal Council strongly supports social economy initiatives with enabling public policies. Our membership in C.I.T.I.E.S.  reinforces our capacity not only as a city, but as a society. Ongoing dialogue and co-construction will permit the sharing of lessons, experiences and processes internationally. Today, Barcelona already benefits from the social economy experiences in Montréal and other members of C.I.T.I.E.S. and is committed to continuing on this track.”
− Gerardo Pisarello, Deputy Mayor of Barcelona

‘’In today’s era of the fourth industrial revolution and declining economic growth and increasing income inequality, in order to go far, we need to go together. We need to strengthen a sense of community around the world and a sense of solidarity and cooperation as well. I believe that through the activities of CITIES, we will be able to promote unity and collaboration and also facilitate the sharing and learning of different cases and best practices around the world.’’
− Won-Soon Park, Mayor of Seoul

About C.I.T.I.E.S.
Implemented as a result of the Global Social Economy Forum—GSEF2016, co-organized by the City of Montréal and the Chantier de l’économie sociale, C.I.T.I.E.S. supports the international gathering, sharing and transfer of knowledge and best practices in the field of the social and solidarity economy (SSE). Through exchange, transfer, training and consulting on public policy and mechanisms for collaboration between local governments and SSE ecosystem stakeholders, the centre fosters the emergence of common and multi-territorial projects that encourage inclusive and sustainable development. C.I.T.I.E.S. currently comprises the cities of Seoul, Barcelona, Bilbao and Montréal.

A new Deck13 development studio to open in Montréal!

Focus Home Interactive, a leading French video game publisher, is announcing that its...