The International Air Transport Association (IATA) announced it is increasing its Montréal headquarters operations with the expansion of its Financial and Distribution Services (FDS) division.

The move is expected to grow IATA’s employment in Montréal to more than 400 with the addition of 27 full-time jobs—some newly created, others relocated from Geneva, Switzerland.

“Our decision to expand our operations in Montréal is an important strategic move for IATA. Since 1945 IATA has been headquartered in Montréal. Led by the presence of ICAO, Montréal is one of the world’s great civil aviation hubs and a cost-competitive place for us to conduct our global business operations. In 2015 we moved the leadership of our Airport, Passenger, Cargo and Security Division to Montréal. And this latest move will enhance our presence even further,” said Alexandre de Juniac, IATA’s Director General and CEO.

IATA’s mission is to represent, lead and serve the airline industry. Its 280 member airlines from 120 countries comprise 83% of global traffic.

This expansion of IATA’s Montréal operations is part of the creation of a Global Delivery Center (GDC) where the back office functions for IATA’s Financial Settlement Systems (FSS) have been consolidated into four locations. This allows IATA to better meet increasing expectations of airlines, travel agents, and freight forwarders using the FSS, which manages more than $400 billon of industry settlements annually.

“IATA’s financial settlement systems are the back office of the airline industry. They facilitate the selling, reporting, and remittance procedures of IATA-accredited passenger and cargo sales agents with some 400 participating airlines. Montréal will play a key role in the GDC which also includes Beijing, Madrid and Singapore. Working together across these locations, the GDC will ensure that the airline value chain benefits from the game-changing innovation that are transforming the financial services industry,” said de Juniac. 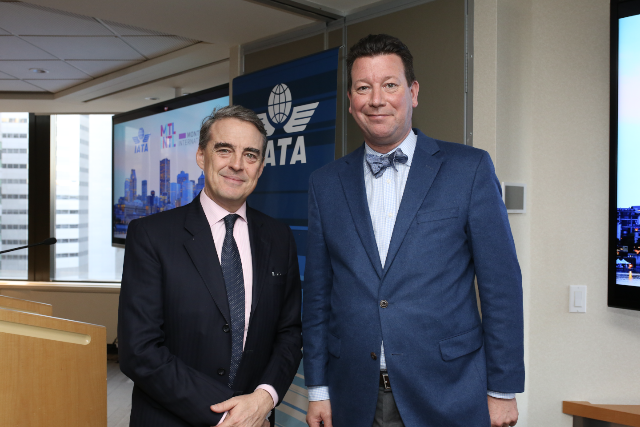 “The expansion of IATA’s Montréal head office will bring several high-talent professionals to the city and contribute significantly not only to the Montréal aviation hub but also to the Greater Montréal economy,” notes Hubert Bolduc, President and CEO of Montréal International. “It also helps reinforce Montréal’s leadership position as the third largest aeronautical centre in the world, after Seattle and Toulouse.”

“The aerospace industry is a key economic driver for our country. The industry is a leader and a source of inspiration when it comes to innovation. It provides 211,000 Canadians with highly skilled, well-paying jobs, generating more than $28 billion in economic spinoff. We are proud to support the expansion of IATA in Montréal because its presence strengthens our industry and generates $16.7 million in economic benefits. There is no doubt that the implementation of these new programs in our city will revitalize the synergy that already exists in air transportation in Montréal and create numerous high-quality jobs.”
− The Honorable Navdeep Bains, Minister of Innovation, Science and Economic Development and Minister responsible for Canada Economic Development for Quebec Regions (CED)

“We are delighted that IATA chose to expand its activities in Montréal. It is a great testimony to the city’s assets: the recognition of Montréal as a hub for the aerospace industry, the quality of the ecosystem provided to international organizations and the quality of life it provides to its employees. This decision will enable IATA to benefit from the expertise of many more qualified workers from our province. It is with great enthusiasm that the Government of Quebec supported this expansion.”
− Christine St-Pierre, Minister of International Relations and La Francophonie

“IATA’s decision to farther expand its operations in Montréal reaffirms our city as a world civil aviation capital and a cost-competitive environment where high talent professionals from around the world converge. This move will undoubtedly benefit Montréal’s capacity to play an important role in aviation industry.”
− Valérie Plante, Mayor of Montréal and President of the Communauté métropolitaine de Montréal