I choose Montréal is kicking off a new campaign to invite all the international students in the city to stay in Montréal after completing their studies.

With the new academic year almost about to start, I choose Montréal (ICM) is also preparing for the start of school and kicking off a new campaign. For the third consecutive year, ICM is inviting all the international students in the city to stay in Montréal after completing their studies.

A new ad campaign for the start of school

As of August 26, the ICM colours will be branding the campuses and bus stops at Concordia University, ÉTS, HEC Montréal, McGill University, Polytechnique Montréal, Université de Montréal and UQAM as part of a new poster campaign.

The ICM team, which is busy promoting the Montréal student experience throughout the year, is working to attract international students and support them in their plans to study, work and live in the region.

ICM is a Montréal International initiative in partnership with the Government of Québec. ICM works closely with universities, colleges and vocational training centres in Greater Montréal.

ICM invites international students to choose Montréal for their future 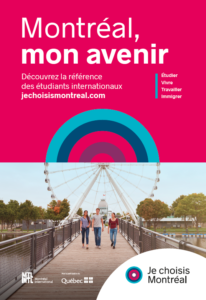 Kabane brand agency created the campaign and chose a tagline that would draw in international students with key words that resonate with them: Montréal, mon avenir (Montréal, my future).

Visually, the campaign borrows the I choose Montréal’s key signature graphic: a target. There is a dual objective behind this campaign, to grab the international students’ attention with just a few words and to get them to learn more about this initiative dedicated to serving them. Accordingly, the campaign was rolled out at various bus shelters and campuses in Montréal.

Contest: win a perfect weekend with your friends

There is also an open contest in which an international student and three of his/her friends can win a perfect weekend in Montréal.

Keep an eye out on ICM social media for details and the many prizes, including the chance to attend a Canadiens hockey game, a relaxing session at Bota Bota spa and a visit to the Montréal Museum of Fine Arts, one of the most popular museums in Canada.

Crowned Best Student City in the Americas and 6th in the world according to the 2019 QS Best Student Cities Rankings, Montréal has proven to be the preferred destination for students as there were over 37,000 international students in Greater Montréal in 2018. Learn why the city always gets such high marks year after year in this prestigious world ranking.