HomeNewsMontréal pays tribute to its...

Montréal International helded its 10th annual reception on November 8, to celebrate the city’s international organizations and honour their contribution. The event was attended by 150 guests, including the Honourable Marc Garneau, Minister of Transport, and Nadine Girault, Minister of International Relations and La Francophonie.

Each of the speakers paid a vibrant tribute to the 65 international organizations (IO) headquartered in Montréal, reminding everyone how strategically important IOs are to Montréal and all of Québec.

As Hubert Bolduc, President and CEO of Montréal International, pointed out from the outset, “IOs alone have a major impact on Montréal, accounting for 1,700 direct jobs, generating $350M in annual spinoffs and, above all, bringing international prestige to our city.” 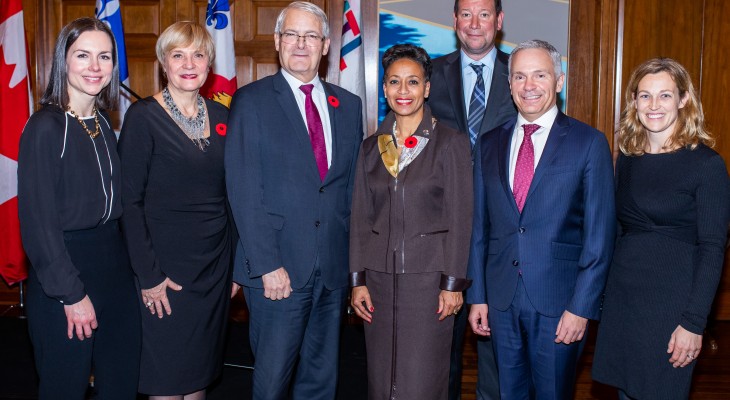 RBC Royal Bank, our host and long-time partner, provided a superb venue for the reception. The event was also a great opportunity to look back at some of the highlights of 2018, including AIESEC’s arrival, IATA’s expansion and all the hard work that went into making sure that our community of IOs—the third largest in North America—could continue to grow and thrive.

Over the past year, the Montréal International team has led close to a hundred initiatives to support projects launched by the region’s IOs, while continuing negotiations with the World Anti-Doping Agency in an effort to keep the organization in the city. Montréal International also worked on five promising projects and was tasked by the Government of Québec with creating two new organizations: one that will defend the international francophone LGBTQI community, and one that will focus on the advancement of artificial intelligence.

With so much going on, we could see a record number of international organizations in Montréal in the coming year. And we are looking forward to it!