Montréal posts best job growth in 2017 among top 20 largest urban centers in Canada and the U.S.

With a 3.6% boost in jobs in 2017—the best performance recorded since 1998—Greater Montréal gets top ranking among the 20 largest metropolitan areas in Canada and the United States. As shown in the table below, Montréal and Riverside, California, are the only two cities to experience over 3% growth, ahead of big job markets such as Toronto, San Francisco and New York City. 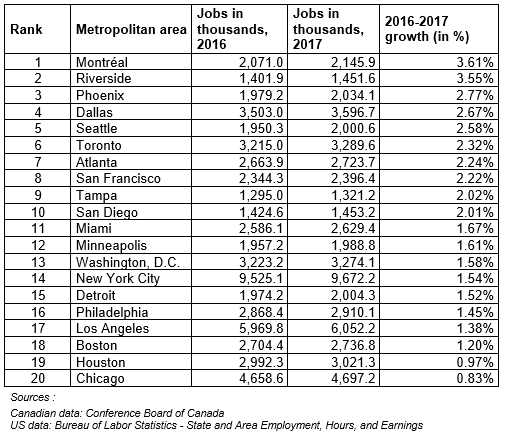 Information and cultural (6.0%), finance (7.2%) and professional, scientific and technical services (8.1%) sectors pushed Greater Montréal to the top of the 2017 job creation ranking. These industries include, in part, high-tech sectors with strong growth, such as artificial intelligence, video games, visual effects, life sciences and health technologies, aerospace and fintech.

Established under the Global Partnership on Artificial Intelligence (GPAI), the...

Behavox, which provides the world’s only AI-based data operating platform that...

A business ecosystem fuelled by innovation

It is a fact that world-leading companies already know: Montréal is one of North...