The IUHPE launches its international secretariat in Montréal

The International Union for Health Promotion and Education (IUHPE), based in Paris, inaugurated today its new international Secretariat in Montréal, located at the School of Public Health of the Université de Montréal (ESPUM).

Benefiting from the combined efforts of the Université de Montréal, ESPUM, Montréal International and its partners, the Executive Board of the IUHPE choose to establish its international secretariat in Montréal, highlighting the importance of the role of the Québec’s metropolis in the global health network. 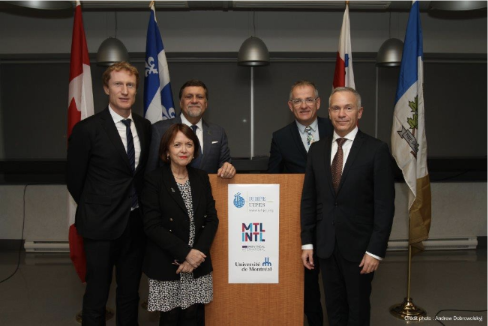 “ Montréal is home to more than 60 international organizations, the largest community in Canada and North America, just after Washington and New York. The arrival of a flagship organization such as the IUHPE helps to strengthen and promote this unique ecosystem, in addition to positioning the metropolis at the heart of international discussions on public health,” said Mr. Hubert Bolduc, President and Chief Executive Officer, Montréal International.

We know how strategic international organizations are for Montréal and it is fundamental to support them to see them grow in our metropolis, » he added.

As an international non-governmental organization, the IUHPE is unique in the field of public health due to its global scope, the diversity of its expertise in the fields of research, practices and policy development and its ability to work in several languages.

The IUHPE brings together people and institutions from around the world dedicated to the different areas of health promotion, including the development and transfer of knowledge, working in partnership, health-promoting environments, social determinants of health, prevention and control of diseases and health risks.

“ We at the IUHPE are delighted to be opening our new office in Montréal. The support and encouragement we have received from Montréal International, city, province and federal agencies, and the University of Montréal’s ESPUM have been instrumental in our decision to create our secretariat in Canada. With the publication of the Ottawa Charter in 1986, Canada has demonstrated its commitment to and leadership in health promotion, and therefore it makes sense that the IUHPE would set up an office here. We look forward to building on our past links and to forging new ones to take forward global health issues, and, of course, using our network to help colleagues in Montréal, the Province of Quebec and across Canada,” stated Mr. Graham Robertson, President of the Executive Board of the IUHPE.

“ Welcoming the IUHPE International Secretariat in Montréal is excellent news for public health in Quebec, Canada and North America. This new proximity to IUHPE international actors will allow a better synergy for future and fruitful collaborations. Montréal is at the crossroads of Francophone, Anglo-Saxon and North American traditions in public health, making it a strategic choice to establish an international organization such as the IUHPE in our territory. This decision will strengthen the role of ESPUM in Quebec, and on the Canadian and international scenes,” explained Professor Réjean Hébert, dean of ESPUM.

The inauguration of the International Secretariat of the IUHPE took place in the presence of representatives from the government of Canada, the public health scientific community of Montréal, Quebec and the members of the Executive Board of the IUHPE.

About IUHPE:
For more than 65 years, the international Union for Health Promotion and Education (IUHPE) has been mandated to contribute to the improvement of global health through education, community action and public policy development and contribute to the reduction of social health inequalities.

A true global forum for the exchange of ideas, knowledge, know-how and experiences, the IUHPE promotes the development of collaborative projects at the global and regional levels.

About ESPUM
École de santé publique de l’Université de Montréal (ESPUM) is the only institution of its kind in Quebec and a leader in Canada and the French-speaking world. It is a centre of excellence and critical reflection in teaching, research and knowledge translation in all fields of public health.

Drawing on scientific knowledge and expertise, ESPUM offers its students’ high-quality graduate programs. It is also the only French-speaking establishment accredited by the Council on Education for Public Health.

AMA, a pioneer in smart workplace solutions using assisted reality, is pleased to...

Dialectica, a fast-growing information services company, has officially launched in...

Amazon Games today announced it has opened a new game development studio in...

AppDirect Canada, a subsidiary of US-based AppDirect, announces the expansion of its...