Zenika, a leading French provider of IT and digital transformation services, will locate its North American headquarters in Greater Montréal and create 50 jobs over three years, announced Carl Azoury, Co-founder and CEO of Zenika. Valérie Plante, Mayor of Montréal and Chair of the Communauté métropolitaine de Montréal, was on hand for the announcement, which came at the Paris Conference organized by the International Economic Forum of the Americas.

“Montréal is on everyone’s lips these days in France and around the world so, naturally, we decided to pick Montréal to make the leap to North America as part of our global expansion strategy,” said Mr. Azoury. “The city’s vibrant economy and bustling digital transformation scene prompted us to set up an R&D centre there so we could focus more on product development,” he added.

Known for its methodology and expertise in web, mobility and big data technology, Zenika provides a range of personalized consulting, training and development services to small businesses and large corporations alike. The company is well known for its ZenikaLabs, which lets customers quickly test new solutions before committing to them, and its digital agency Aya, which specializes in end-to-end web development services.

“Montréal is proud to be home to Zenika’s new North American headquarters. I am thrilled that France’s leading provider of IT services has decided to come to Montréal, drawn by the city’s vibrant energy and innovative ideas. Many IT giants have already opened offices in Montréal to tap into the city’s rich pool of skilled talent. The jobs that Zenika will create show what Greater Montréal and its workers have to offer. Zenika will join other major players in Montréal to help shape tomorrow’s economy,” said Ms. Plante.

Founded in Paris in 2006, Zenika has over 300 employees across offices in Singapore, Canada (Montréal), and France, where it ranked third among companies with fewer than 500 employees on the Great Place to Work list of 2017 Best Workplaces. As part of its commitment to Montrealers, Zenika will work closely with specialized educational institutions, train students and scout for skilled talent.

Montréal International, Greater Montréal’s investment promotion agency, supported the company every step of the way. “Zenika’s decision strengthens Greater Montréal’s position as one of the most attractive cities in the world. France, with its IT companies, is a huge market for Montréal. That’s why we need to promote the region’s economic strengths, including its pool of skilled workers, world-class universities and tremendous potential for innovation,” said Hubert Bolduc, President and CEO of Montréal International.

Between 2011 and 2016, Greater Montréal saw the number of workers specializing in Information and Communication Technologies (ICT) increase by 23% to 137,000. In 2016, ICT projects alone accounted for 70% of all investments facilitated by Montréal International.

About Zenika
Founded in 2006, Zenika helps companies drive digital change through innovation in management, technology and organizational processes. Zenika’s strength lies in its ability to adapt and carve a niche for itself in emerging tech sectors by bringing together talent with diverse skill sets and expertise. 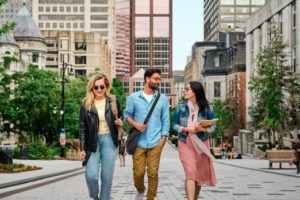